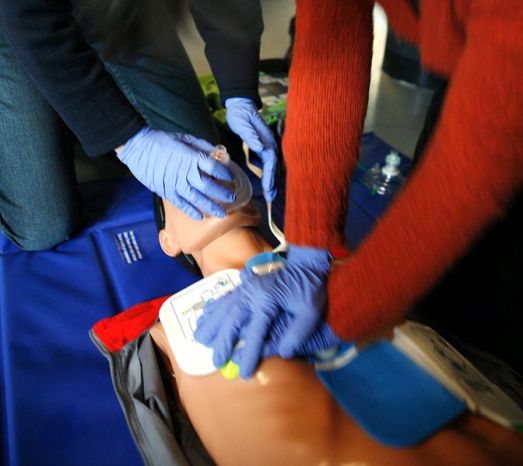 BEST UPDATE OF ALL:  Here’s an article in Forbes with all the facts.  FINALLY!!  Most important one?  The elderly woman who died didn’t have a Do Not Resuscitate Order but she was very clear (and had made it clear to her family) that she did NOT want life sustaining measures taken to keep her alive.  In the end her wishes were observed.  No tragedy.  No horror.  No fault.

UPDATE:  Some side effects and statistics:  If CPR is done properly (i.e. hard enough to move the blood) the three biggest immediate risks to the recipient are broken ribs and possibly the sternum, vomiting with aspiration of the vomit into the lung and subsequent pneumonia, and brain injury due to prolonged absence of oxygen to the brain. Then there the subsequent dangers faced in a long stay in intensive care including infections (with a rapidly growing list of drug resistant viruses and bacteria), all the side effects (and possible errors) of complex drug regimens, inadequate pain management and/or opiate side effects such as increased difficulty breathing and eliminating, rapid muscle loss leading to loss of ability to perform activities of daily living, and…well, more.  All of these can easily lead to even further complications in the case of an elder.

One study in Michigan put the chances of a person in their 80′s being discharged from the hospital alive after CPR at under 4%. Another one in Washington State put the odds slightly higher with about 9.4% of those in their 80′s being discharged and 4.4% of those in their 90′s. Neither one really defined what quality of life they were living when they were discharged though, other than “alive.”  The hidden numbers would be fascinating.

As I write this there are twenty-three headlines trending on the Google news feed about the breaking case of a nurse who refused to administer CPR to an eighty-seven year old woman who collapsed in a nursing home. The elderly woman subsequently died.  All of the headlines are worded something like this:

Punchy, no?  These headlines are factual but, far more important, they’re attention grabbing.  They’re designed to outrage you because, as every editor worth their salt knows, outraged readers are far more likely to read the following article than un-outraged ones are.

But they’re also totally lacking in nuance.  They reduce the entire situation to a couple of sensational facts and then conveniently ignore everything else, which make the reports ultimately misleading…and I say that with 100% conviction even though I don’t know the particular details of the case.

This is what I do know:

1)  How incredibly violent and destructive CPR is on a frail, weakened, and aging body, how much intense pain and suffering it inflicts on the elder involved, and how often CPR leads to further complications that then help kill said elder anyway, just in a different, longer, and more painful way.

2)  How often Do Not Resuscitate orders (a legal document specifically citing the wish of the elder NOT to have CPR administered) are ignored by facility staff and emergency medical personnel for legal reasons.

3)  How often unsuspecting families wind up being called to the ER after the fact and presented with an elderly loved one who just wanted to be allowed to die peacefully in their own bed, but who is now stuck in intensive care, cocooned in tubing, medicated into unconsciousness, and off limits to all but a handful of core loved ones now faced with the unimaginable (and mostly incomprehensible) battery of choices concerning what to do next.

4)  How often these same families are then also presented with an unimaginable (and mostly incomprehensible) bill.

5)  How often the medical personnel involved hate to do any of this to a frail elderly person and their loved ones.

6)  How the numbers of these kinds of tragic, confusing situations are escalating as our exploding elder population lives longer, more debilitated, multi-disease prone lives while, at the same time, our medical technology grows ever more adept at keeping them alive and dangling whether they want it or not.

Let me be clear here: I don’t know what happened in this specific case.  I don’t know whether this particular elderly lady had specific wishes about CPR or, if she did, whether she’d ever expressed them to anyone.  I have no way of knowing how sick and/or frail she was, how she felt about the quality of her life, or how her family felt about losing her.  I don’t know the legal reasons why the nursing home she was in had a No CPR policy in place, or whether the nurse involved was following facility protocol willingly or totally against her conscience.

But I do know this: everyone involved in this incident was, in one way or another, influenced by the extraordinary stresses listed above…we all are, even if we’re not elderly yet or know anyone who is…and it doesn’t do any good to try and reduce it to sensational black and white headlines that outrage and/or scare the shit out of everybody.

I’m hopeful though that as time goes on, this incident will help promote a better conversation about CPR and the elderly, a wider conversation that’s badly needed.

UPDATE:  Here’s a link to another article that starts to address more of the nuances involved.  Evidently, the woman’s daughter “said she has no problem with the care her mother received at Glenwood Gardens.”  The conversation begins?

UPDATE 2:  According to a local news station the elderly woman did not have a Do Not Resuscitate order.  The woman’s daughter is a nurse and still says she’s satisfied with the care her mother received which suggests there may be specific medical details pertinent to the situation which have not been released.