I walked out this morning to empty the trash and discovered a brand new duckling lying on his side in the driveway and struggling weakly against the cold concrete.  He’d been abandoned due to some deformity.  One wing is shortened and rather useless and has a little hunch on the shoulder above it.  Couldn’t just leave him lying there so I brought him in.

He’s been steadily improving as the hours go by.  I’ve taken him out to the garden a few times to observe his mobility.  He was still falling over on his weak side but was beginning to occasionally recover without help.

And, per advice from John Gray, the bird king over at the ever fabulous Going Gently, I’ve given him warmth, water, food, and a stuffed bear, which he’s really taken to. 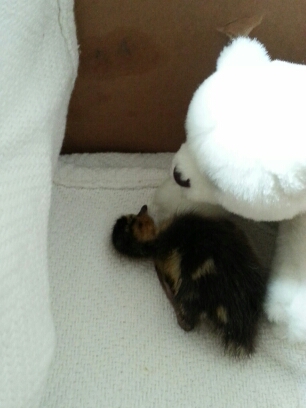 I’m not quite sure what to do next.  Rescue center maybe?  I’m in a quandary as I’m not an advocate of domesticating wildlife yet this little guy could never survive on his own.  Shit.

In the meantime I’ve named him Quasimodo but am calling him Modo for short.