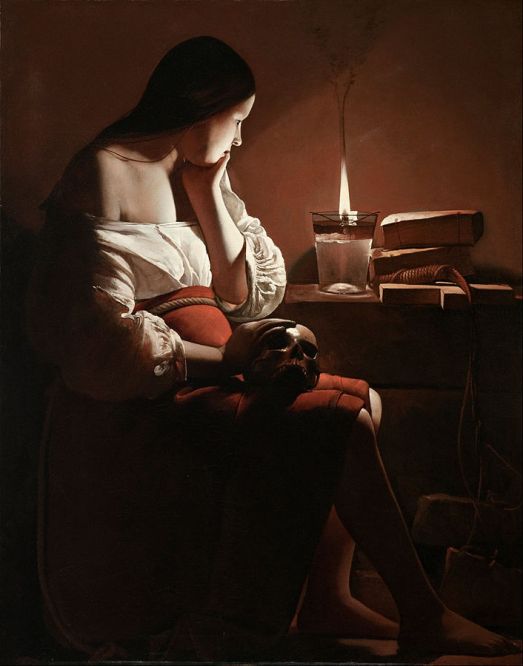 Magdalene With the Smoking Flame by

Editor’s note: I actually wrote this post a few years ago but was too…I don’t know. Devastated? Confused? Chicken?…to actually publish it. I just found it again this morning, brushed it off and read it, and realized it’s time I just got over myself and put it out there for whatever it’s worth. The truth is I’ve healed so much over the last three and a half years and it’s mostly because I found a lot of other people who understand and aren’t afraid to talk about this kind of stuff and it’s amazing to me…extraordinary…how much that’s helped to normalize my life again. So, here’s passing at least some of that gift on.   Love you all.

We had dinner with Cam’s parents last night and it was a good visit. It’s coming up on two months now since he committed suicide so of course they’re having a lot of bad days and bad nights…some good moments but still mostly hard…and I admit, it was a splendid gift for us to be able to sit down and share it all with them. Shook us back awake from the swiftly creeping denial and oh-so-human stupor of taking things for granted again.

Life is a rare, luminous, and devastating gift. God help us.

Today my thoughts turn back to something I observed during the days immediately following Cam’s death, the period when we kept gathering to cling to one another at the lip of the abyss that had opened at our feet.  There were a lot of people impacted by his loss…Cam touched more lives than we had any idea…and there was somewhere in the neighborhood of 1200 people who attended the memorial service alone, not to mention the swarms that kept showing up at vigils, memorial events, dinners, and other spontaneous gatherings.

And I couldn’t help but notice that, while I heard everyone openly discussing Cam’s battle with depression and suicidal thoughts, only one person, a young woman, acknowledged that she had waged a battle of her own.  Which at first seemed like a good thing…the rest of us must all be safe then, no?

But then I remembered the recent surveys showing that almost four percent of adults battle clinical depression with even higher rates for teens while, in the U.S. alone, more of us now die from suicide than motor vehicle accidents.

Which is when it dawned on me that it was statistically impossible for Cam and this one other girl to be the only ones out of the thousand-plus assembling who’d ever experienced suicidal thinking. Far from it in fact. A fair number of the people I was looking at and talking to must have, at some point, toyed with the idea of taking their own lives. And there was a smaller and scarier subset of the people around me who were currently considering it.

But for some reason all of them were maintaining strict radio silence.

Actually, not for some reason. I know exactly why they weren’t saying anything. I used to think about ending my life all the time and almost did a few times…when I was nine, twenty-eight, and thirty-five years old to be exact. So of course I’m familiar with the ebb and flow of dark thoughts. But I wasn’t speaking up either.

Why? Because suicide is a very taboo topic. It’s laden…laden…with shame whether you’ve tried it yourself, considered trying it, have it in your family, or even so much as mention it in polite company. (Try bringing it up at your next holiday dinner and see what happens for yourself.) The taboo against talking about suicide is deeply entrenched and we all learn early and well that secrecy is the ONLY socially correct response.

I’ve always thought that people who can stand up and openly challenge a taboo this powerful are almost mystically brave, which I’m not. N.O.T. During the weeks following Cam’s death, I freely admit I only revealed my own history with suicide one time. And it was the edited and not-entirely-true version of…I almost committed suicide once…and, as expected, the disclosure wasn’t received well allowing my clam shell to quickly slam shut again.

Which, in all honesty is what I really wanted. I was incredibly uncomfortable bringing it up.

But I’d be lying if I said that Cam’s suicide hasn’t called up the old ghosts for me…not that killing myself holds the allure for me it once did, thank God. I passed through a final ring of fire on my last attempt and finally discovered a powerful reason to live, something that’s sustained me ever since.

But I do vividly remember the old stomping grounds of suicidal ideation…that dark and isolated, grotesquely seductive terrain that the terrible wounding of life can topple anyone into…and Cam’s death along with another young family member’s recent suicide attempt has not surprisingly called up those memories. The old ghosts are back, vivid as ever, and they’re deeply distressed and chattering at me to do something.

Only this time, instead of urging me to end my life they seem to have come up with another plan. They want me to emerge from my hidey hole and start being more up front with the world about this part of my life. They want me to say something. They insist…no, moan…that keeping the secret is bad for me and truly awful for them, and they don’t really care anymore if I have mystical courage or not. Joan of Arc isn’t available and I’m all they’ve got.

These ghosts are giving me a lot to think about. I’m not sure what exactly they want me to say, but I know they’re right about one thing…I have been hiding out rather than talking about it. It’s why I quit posting here and why I almost stopped writing entirely for the last five months. With two family members attempting it, OF COURSE suicide has been on my mind a lot, but I really have been too afraid to explore it here on the blog.

Editor’s note: Not so much anymore though. I have much to be thankful for.

I finally watched the Japanese film Departures last night and was astonished and blown away, both.  The 2009 Oscar winner for Best Foreign Language Film also captured thirty-four other international film awards and, in my humble opinion, deservedly so.  It took the difficult subject of “encoffining”, the ceremonial (and totally fascinating) bathing and dressing of the recently deceased which is performed in front of the family, and treated it with a lightness of touch and reverence that made it both moving and accessible.  Add in a stunning soundtrack and cinematography and no wonder it was such a hit.

I’ve caught a rabid cold from the hubster so, much as I’d love to go on and on about it, I don’t have the energy.  It’s hard to juggle a parade of soggy tissues and tea cups while trying to type so I thought I’d just leave you with the trailer for the movie.  That way you can get a flavor of it for yourself.

The one thing I will say is that this movie captured the beautiful, uplifting experience I had over and over again with the dying and their families.  It somehow managed to portray a little of everything that’s involved; the grief and joy, anger and humor, the awkwardness that so often arises in circumstances of profound intimacy, the need for forgiveness, the graphic elements involved, the enduring love, and the ultimate affirmation of life that comes when death is received with dignity and grace.  It also captures how the gifts of those who die can pass outward in a spiral, swirling back into the lives of those left behind to aid in healing their wounds, both new and old.

I give this movie two thumbs up needless to say.  Here’s the trailer: