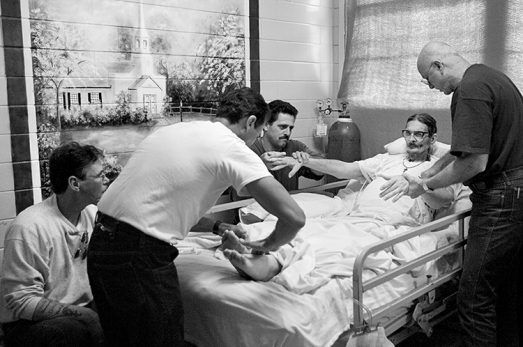 Photo from the award-winning photographic documentary Grace Before Dying

What transformed the Louisiana State Penitentiary at Angola, one of the most violent prisons in the South, into “…one of the least violent maximum security institutions in the United States”?

If you get a chance, check out this website that Linda over at What Comes Next? turned me onto.  It’s called Grace Before Dying and is inspiring (which is saying a lot with all the turbulence in the world right now) and is about the photographic documentary by Lori Waselchuk that chronicles the prisoner-run hospice program at Angola State Penitentiary, Louisiana’s maximum-security prison.  Evidently, a life sentence in Angola means both life and death.  85% of the roughly 5100 inmates die there and, up until the hospice program was started in 1998, that meant dying alone in the prison hospital.  But now they have a hospice ward where the terminally ill inmates are transferred, and once there the dying are tended almost entirely by inmate volunteers who are serving life sentences themselves.

It seems to be this most basic act of simple humanity that’s transforming the prison population…which comes as no surprise to me.  Tending the dying in hospice transformed me, too.  It transforms everyone who does it.  From the website:

“The hospice volunteers’ efforts to create a tone of reverence for the dying and the dead have touched the entire prison population.”

Frankly, the prison system we’ve set up in this country has always puzzled me.  I’ve never been able to figure out just what, exactly, we’re trying to accomplish.  The focus on isolation and torture (because really, I don’t think you can call what happens in these hell-holes simple punishment) and then release for godsakes, strikes me as short-sighted.  It’s like capturing a dog doing damage near a downtown cafe, locking it up in a small cage, systematically brutalizing it for five years, then taking it back to the same sidewalk cafe, telling it to behave, and turning it loose again.

What do we expect?  Lassie?

In this country, we’ve coupled justice with revenge and their offspring have been multiplying for years now.  Our prison populations have swelled to the point where they’re wreaking havoc with both our public safety and economic stability, (look at what California’s currently dealing with.)  Doesn’t it seem like now might be a good time to consider trying something different?

Well, some prisons are.  There’s a growing trend to team with animal shelters, allowing inmates to help care for and train abandoned and/or abused dogs.  Another program in Mississippi called PACT partners inmates with abused horses.  Like hospices in Angola and other prisons, these programs structure relationships for the inmates that cultivate bonding, vulnerability, kindness, responsibility, and empathy, all qualities that naturally deepen our innate humanity.

Like tends to beget like.  Cruelty begets cruelty and inhumanity begets inhumanity.  If we really want to create a better, safer, kinder world, then we should probably be trying to foster everyone’s humanity, not destroy it.  By instituting a hospice program, the prisoners at Angola have been given the opportunity to foster theirs.

Dying is generally regarded as the ultimate destructive force…and it is.  I would never argue with that.  But what most people don’t understand (yet) is that it also has a profound ability to heal.  Everyone acknowledges that a “good death” is important for the person who’s actually dying but it goes much farther than that; a good death is also critical for the well-being of those left behind.  A bad death creates scars, the tentacles of which usually spread far and deep through the lives of survivors, and it embeds a terror of the future that eventually infects everything.  Everything.

A good death, on the other hand, tends to nourish our compassion, deepen our humanity, expand our understanding of life, and lift us out of that underlying sense of loneliness and individual isolation that defines so much of modern life; all things that ultimately serve to ease this fear of the future rather than aggravate it.

“The hospice volunteers must go through a difficult process to bury their own regrets and fears, and unearth their capacity to love. Grace Before Dying looks at how, through hospice, inmates assert and affirm their humanity in an environment designed to isolate and punish.”