Well then.  Here’s an interesting development.  The news broke day before yesterday that two wolves took down a cow about a mile west of where I regularly take Dane up hiking in the hills.  Suddenly, the highly controversial subject of wolf reintroduction and management here in Idaho has come remarkably close to home.  (Our home.  About five miles to be exact.)

Residents of Eagle are a little uneasy right now, with some of those living north of town bringing in their horses and other livestock for protection.  The department responsible for dealing with problem wolves in Idaho is USDA Wildlife Services and so far, in spite of numerous flyovers, they haven’t been able to locate the two wolves believed to be responsible for killing the cow.

Which then begs the question:  Do I want to take Dane up there for his afternoon romp today?

Actually, I’m not really asking myself that.  Of course I’ll take him.  I’ve been hiking up in the mountains for years now, in all kinds of places where cougars, bears, and wolves  live.  Is there some risk?  Absolutely.  I’m not a big fan of denial as a risk management tool.  Do I mentally discount the horror of getting mauled and possibly killed and eaten by a wild animal?  Not at all.  While I’m a tree-hugger of sorts, I’ve never been the kind that romanticizes wild animals as either noble or cuddly.   I have a very healthy fear of big claws, strong jaws, and sharp teeth. 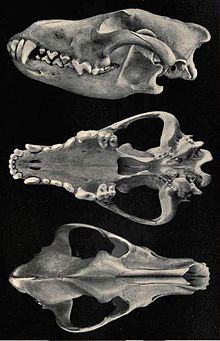 In all likelihood if there was an attack, they’d probably go after Dane.  Wolves are traditionally timid around human beings so those kinds of attacks are extremely rare, but they attack dogs.  There’s definitely a greater risk for him than there is for me.  However, these two wolves are most likely juveniles striking out to find new territory and juveniles tend to be far less predictable than adults.  Cougar attacks on humans, which used to be relatively rare, have been growing in the last couple of decades as humans encroach further into wilderness areas, and the majority of the attacks are by juveniles.   So, while Dane’s risk is greater, I by no means get a free pass.

So here we are, suddenly standing on the shifting front line of the controversy, confronting the complex challenge of species reintroduction on a very, very personal level.  Me?  I love wolves.  But then the majority of people do.  Even the people who oppose their reintroduction admire and respect them.  They’re magnificent, beautiful, wild, and inspiring animals permanently woven into our history, mythology, and group unconscious.  The thought of a world without them is unsettling and unutterably sad.   Having said all that though, I don’t want Dane or I to be dead either.

And therein lies the paradox we’re all confronting, not just with wolves but with much of the ancient world we’ve inherited and are now changing on a massive scale.  I have no idea what the solutions to these kinds of problems will be, nor do I have any idea what the world will wind up looking like someday.  Right now I’m just concerned with getting my dog and I through our next excursion.  Today it’s my turn to figure out how to straddle this place where the past and future collide.

I think, at a time like this, it’s important to consider the big picture.  The truth is, Dane and I both live in a world every day with far greater risks than a wild animal attack.  (i.e. getting T-boned at an intersection, sickened from ecoli contamination in our food supply, or euthanized for attacking the neighborhood cats among other things.)  With all the risks that wilderness and wild things hold, civilization is no picnic either.  In fact, I think my chances are probably better facing a wolf in the foothills than a drunken slob hurtling down the interstate in a two-ton SUV.

But for now, Dane and I need to get going because I really don’t want to be hiking up there when it starts to get dark.  So I’ll  just throw on my boots, grab my bear spray, and we’re out of here. 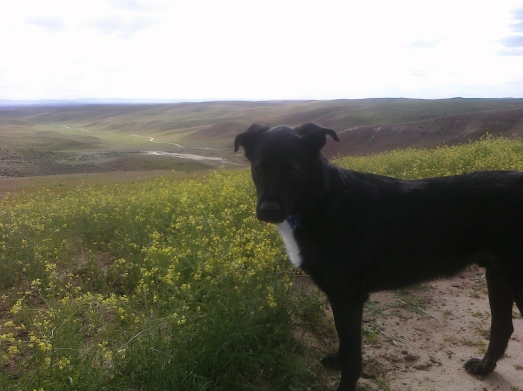 Dane and the valley (back behind) where the cow was killed.