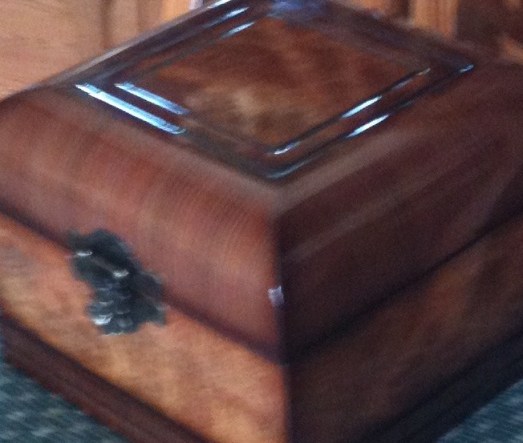 (Sorry for the blur but this is the only picture anyone thought to take.)

A couple weekends ago we drove down to the little town in Nevada from whence my people come and buried a small box in the cemetery there.  It contained a variety of things; a seashell, photos, an old, scribbled note in a silver-plated box with blue velvet lining, a thank you card, a George Washington $1 coin from the U.S. mint presidential series, a Chinese coin, pictures of two Hindu saints, downy feathers, a secret bundle, and a handful of ashes from my mother who died over two years ago.

Some of these things belonged to her and others were things we thought she should have.  The seashell and feathers–because she adored the ocean and migrating birds.  The Hindu saints–because they guided her in life, so how much more important that they be there with her afterward?  The secret bundle–from a secret person for secret reasons known only to them.  And the ashes because they were a last, little part of her that we could come and visit whenever we felt the need.

The old note, I found a couple months after she died.  It was a short list of prayers folded up inside the silver box and stashed with her jewelry, dating from about a year before she died.  The prayers were written in this order:

1)  For an improvement in her health (which clearly didn’t work out so well).

2)  For ten million dollars invested in a trust yielding 8% a year (also a no-go).

3)  For greater clarity (yes!…she was having amazing breakthroughs and insights during her last months).  And,

4)  A last, loving wish for enlightenment and peace for the whole world. This was the one that made me cry.  It was so like her, my mother, forever toting the world around with her in her bottomless basket of good wishes.

I spent days before leaving for Nevada sifting through the mementos of her life again–through all the deep, swirling emotions they resurrected–looking for the right pieces to place inside the box.  Because my mother believed in reincarnation I carefully tucked in the list…just in case prayers carry over from one life to the next.  The coins went in for murkier reasons even I don’t entirely understand; maybe as a token for the wealth she craved, or as an irrational but oh-so-necessary payment to the Boatman for safe passage, or perhaps just because they were made out of metal and would still be there long after the box itself decomposed.

Six of us came to sit around that small, square hole in the ground, drinking water and wine, soaking up the sun and wind, toasting her memory and telling her stories.  We had a folding chair for each of us and an extra one where we set the box.  We occasionally grew raucous, sprinkling wine over it after a toast, because sometimes remembering in the midst of great loss can just do that to you.

Before we placed the box down in the hole, I opened it one last time so we could have a look inside.  The wind rustled the downy feathers and then blew one out, whisking it over the hillside below us.  It floated above the headstones…more like a butterfly really, than the bird it came from…before finally rising higher, then higher, then higher into the sky.  We all stood transfixed and staring, following its lovely escape in surprised silence, but the same thought was in each of our minds.

Look!  Look! There she goes!

Afterwards we took handfuls of dirt, one by one, and threw them into the hole to cover the box, and with each handful we cried or laughed or were momentarily still…throwing our prayers down for her, too, along with the love of others who couldn’t be there.  With the first handful, grief overwhelmed me and I sobbed on my knees, unconsciously dragging my dirty hand across my forehead and cheeks.  I had no idea why I was doing it except that the grit across my skin felt welcome and good; raw and sharp enough to match the scraping of the wound inside me.

It was the leading edge of a brief but wild storm, and once it passed I felt calmer and lighter for it.  Cleansed and good.  Eventually we finished and, after replacing the small square of turf over the loose dirt, we packed up our things and traipsed off to the city park to eat a small picnic and finish the wine.

I like to think of that small box now, pressed down by the weight of dark, moist earth and already starting to decay, its cache of love and prayer, life and joy, seeping out into the ground like something with a half-life of ten thousand years.  It never ceases to amaze me, how relentless this great current of Life is that flows through us, spilling down from one generation to the next like a perpetual champagne fountain, as if we were ever-widening tiers of crystal flutes constantly filling and spilling simultaneously.

My mother is gone but the huge gifts of her life are still washing down through the bewildering number of other lives she altered just by existing here for a while.  They’re inside all of us who loved her and passing on into all those we love in our turn–inside everything she touched and every place she passed through.

And as of a couple weekends ago those gifts are now inside that tiny box, too, buried up in the high desert mountains where they will be leaking their grace for generations to come.