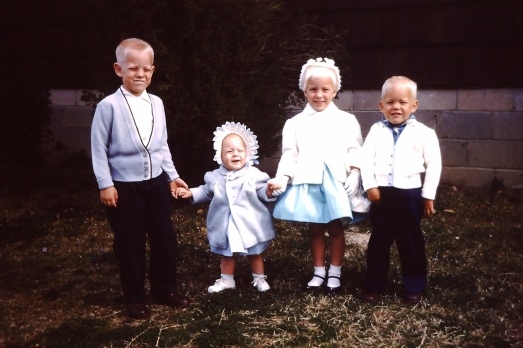 I’m the baby, fair budding to become a sunflower, second from left.  The young Queen Mother to my right is my only sister, while the boy doing the Winston Churchill imitation to her right is my middle brother.  Then there is the Eldest on the far left dignifying the portrait with his expression of Supreme Effort.  The youngest among us (who recently discovered this little treasure) was not yet born.

LAST WEEK I RAN AWAY TO THE MOUNTAINS, and I think this is the first time I’ve ever missed posting on or around my Friday deadline.  Not a first-time I’m proud of or would like to repeat anytime soon.  I know there are tools available for scheduling a post to publish even when I’m gone so really, there’s no excuse.  (Not that I think it’s a life or death issue but still, the discipline is important for me as a writer.  So, note to self: research “scheduled publishing” tool and use it at least once before the end of the month.)

There.  Now on to the Easter Portrait.

My youngest brother became Guardian of the Box of Old Photos when my mother died a couple years ago and, during the ensuing sifting, has turned up a couple of gems like the one above.  We had no idea this thing existed.  Indeed, there are a whole series of Easter portraits that he’s uncovered, with a wide variety of outdoor backdrops (let’s play Guess What Military Base We Were Stationed At!), but this one clearly takes the cake.

The photo is of us but actually speaks volumes about my mother.  She was, like most women of her generation, trying to keep up with Jackie-O and, other than at Easter, we were always dressed in jeans and t-shirts, a fact that makes this snapshot-of-an-age even more absurd and delightful.

Ultimately though, I think it’s the accident of lighting that makes it most striking–we’re so illuminated it looks surreal, like we slipped down the rabbit hole in a string of held-hands and landed all dressed up in Wonderland.

ABOUT EMOTIONAL ENDURANCE AND THE DYING:

Moving on, I wanted to take a minute to answer a question about my last post.  In her comment afterwards, Linda over at Rangewriter asked what I meant by “emotional endurance.”  I thought it was a great question and, because emotional endurance is such a vital tool for dealing with difficult challenges of any kind, I wanted to address it in a regular post rather than just in the comment section.

Emotional endurance is just what it sounds like; the ability to endure one’s own emotions.  (Obviously, pleasant feelings don’t require much effort.  What I’m talking about are the painful ones like sadness, despair, anger, shame, loss, bitterness, guilt, regret, helplessness, etc.)  This skill was actually prevalent among the older generations but, during the current, unfolding age of budding-pharmaceutical options, has increasingly fallen into disuse.

And unfortunately, as a treat-and-cure cultural mindset has gradually replaced the older accept-and-endure one, the threshold of discomfort, pain, or uncertainty most people can continue to live and thrive with has fallen considerably.  Now…please.  I’m not saying medical advances aren’t a miraculous gift and blessing; they are.  Anyone who’d want to turn the clock back a century is, in my humble opinion, extreme.

However, there’s also profound value to be had from the old skill of knowing how to contain, endure, and navigate heavy emotions without needing to immediately escape them.  And nowhere was this made clearer to me than in the rooms of the dying.

In hospice I saw person after person after person, (all elders BTW,) deal with levels of emotional pain and loss that absolutely staggered me.  And, with only a couple exceptions, they ultimately did it without requiring antidepressants or a hastened death.  Over the course of their lives these people had somehow learned to navigate huge waves of overwhelm, fear, pain, and sorrow without losing sight of the beauty, love, and value that also populated their end.

I cannot begin to tell you what an eye opener this was for me.  I had no clue…no clue…how much stronger we are than I’d ever imagined, and if I could only pass on one bit of insight from all the wisdom I learned from the dying, that would be it.  Allow me say it one more time, because that’s just how important this is:

We are far, far, FAR stronger than most of us currently understand or believe.  By a multiple of thousands.  I know this, I’ve been there, I’ve seen it.  And I’m not talking about the rare hero, warrior, or saint, either.  (Although they are totally amazing.  Whew…)  No.  I’m talking about the rest of us.  All the ordinary, everyday, getting-along people like you and me that weren’t created for greatness; those of us who just want to raise our families, work a good job, have some hope, and live a decent life.  Us.

What I’d love to see is a cultural return to the recognition and development of this skill for emotional endurance, all the while keeping the growing arsenal of available treatments and interventions ready as back-up, just in case.  Y’know…for those rarer yet dangerous periods when life erupts into something that really is too much, too hard, too destructive, unendurable.

Can you imagine what we’d be capable of, what our lives would be like, what our world could become, with the power of inner endurance and medical relief at our disposal?