There’s a lot going on these days.  First: A news headline.

Beloved daughter and longtime boyfriend get engaged on Valentine’s Day, set date for June.  Mother surprises herself and approves.

Why the surprise? Well, partly because I’m not a big fan of weddings.  In my teens, I used to have nightmares about being a bride trapped in a church ceremony from which there was no escape and I’d wake up every time with my heart pounding, scared to go back to sleep.  These dreams left an impression.  In waking life, I actually ran away during my wedding to the hubster and he had to head me off before I made it into the woods, then carry me back.  (He’s both quick and strategic, thank God.  But that’s a story for another post.)

And then, of course, there are all the other things to worry about where the post-wedding marriage is concerned, especially when entered into by a couple of novices who are all dazed and happy and oblivious to that circle of glowing eyes waiting just beyond the twinkle-lit garden.

But in spite of my entrenched dread of weddings and general worrying nature, when Beloved Daughter and Soon To Be Son-In-Law (SIL) sat us down and told us the news, my first response was enthusiastic and joyful and even…god help me but it’s true…optimistic.  You could have knocked me over with a feather.  I was actually happy for them which, I should mention, is an excellent sign since my initial, gut level reaction to things is usually pretty accurate.

Then there’s the other thing happening.

The hubster’s whole family is still in hospice mode, circling the wagons around Mon Pere as he cheerfully and busily packs as much as possible into the shining, beloved life that still remains to him.  I haven’t posted any updates in a while but he continues to amaze in his approach to the whole thing.

He’s slowed down considerably and is sleeping more and more, but even so he still goes out to attend classes at the local university, voraciously reads and replenishes a stack of books that would choke a pig, gets together with family and friends for every occasion possible, and has thrown himself into a cause that would be of enormous benefit to the safety of our entire community.

He’s extraordinary.  Really.  When I think of how much earlier we probably would have lost him if he hadn’t gone on hospice and started receiving good palliative care, I shudder.  There are too many lives being worsened or cut short these days because of overly aggressive treatment or uncoordinated care late in life, and I’m profoundly grateful…every single day…that Mon Pere managed to steer clear of those treacherous shoals.

He’s a wily old fish, that one.

Then there was this third thing that happened last week.

The hubster’s oldest and best friend lost his 90+ year old mother a week and a half ago and the family held the funeral Thursday evening.  The hubster and I attended, as did Mon Pere since he’s also close to Best Friend.

In fact, Best Friend asked Mon Pere (who is an excellent public speaker) to stand up for him and read a brief vignette he’d written about his mother during the funeral, since he knew he’d break down and sob uncontrollably if he tried to read it himself.  Mon Pere was happy to help out in any way he could.

What happened next was moving and astonishing to me.

In a curious turn of events, the hospice that cared for Best Friend’s mother is the same hospice currently caring for Mon Pere, and since the chaplain presiding over the funeral proceedings was the chaplain for this hospice, Mon Pere knew her quite well.

So before he started reading the vignette, he took a moment to express his appreciation for the chaplain specifically and the kind of work that hospice people do in general, and then things became startlingly poignant when he shared that the reason he knew her was because he was currently in hospice himself with prostate cancer.

I heard the woman sitting behind us gasp when he said it, and there was a brief, electric rustle that went through the room before things settled back down again.  It was only a few sentences spoken simply and sincerely, as though he was sharing that he and the deceased had an old school friend in common, and then he bent his head to read Best Friend’s story.  And that was that.

It was a brief moment, startling and fragile and honest and moving, but everything afterwards was made a little bit more beautiful and real and immediate for it. It was like he’d taken a needle and innocently woven an additional, luminous thread into the tapestry of all of us assembled there, and suddenly life was no longer just a two-dimensional kind of us and them thing anymore—those who are alive and those who are dead.

For a heartbeat he stood there, simple and shining, as a reminder that life isn’t so much a table that we fall off and disappear from as it is a perpetually flowing river, something that’s sweeping us all from upstream to downstream to a final spill out into a big ocean that was always waiting there to receive us.  Best Friend’s mother washed into that sea a week and a half ago while Mon Pere’s pace is picking up in a final, quickening rush to get there, but that doesn’t mean either of them will ever be gone.  They can’t be gone because no matter how far ahead they and their peers get, it’s still the same water carrying us all.

So.  In my third and final reality these days I am:

Wedding-happy, hospice-reeling, funeral-touched, and bobbing somewhere along the length of a winding, luminous river filled from headwaters to ocean with dearly beloved companions. 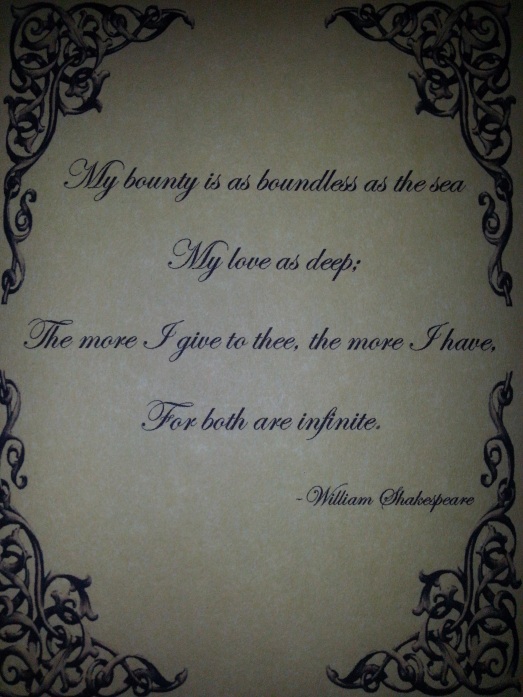