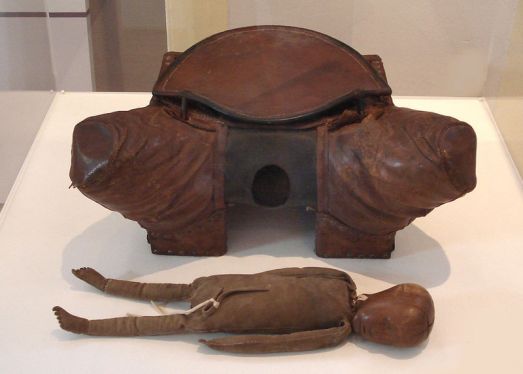 (Photo from Wikipedia: Model of pelvis used in the beginning of the 19th century to teach technical procedures for a successful childbirth. Museum of the History of Medicine, Porto Alegre, Brazil.  Fascinating, no?)

I’ve been going back through my hospice journals while working on the rough draft and came across the following entry from 2005.  It has to do with the similarities between giving birth and dying, similarities that are widely recognized by everyone working in end-of-life care.

I thought I’d throw it up here since most of my writing energy is going into the book these days.  And for any of you still following in spite of the current paucity of posts…my deepest thanks, as always.

“I think part of what the three years working with hospice has taught me so far is that, with as huge and scary as the whole process intrinsically is, it’s still something I can prepare for.

It’s far less frightening to me when I have some kind of plan to deal with what’s going to happen—some kind of idea of what to expect–rather than going into it feeling totally helpless and ignorant.

This idea of having to squeeze back out of my body again reminds me so much of when I was preparing to give birth.

Of course I was scared as I looked down at my stomach-the-size-of-a-pig and realized oh my god, this thing has to come OUT.  Through a pea-sized hole.  And I was even more scared with the second birth because after the first time I had details.

But both times I was as prepared as I could get.  I’d taken my supplements, done my kegel exercises, gone to my check-ups, attended birthing classes and learned how to breathe.

I’d read books, asked questions, talked to other women who’d been through it and knew pretty much what to expect.

I had my team assembled.

I’d done everything I could to get ready and after that…well, it was just up to the birthing gods.  All I could reasonably do was offer up a prayer…please guide us, protect us, and give us safe passage…take a deep breath, and dive in.

I think of dying like that now.  I’m doing my best to prepare.  While working with hospice I’ve watched a variety of different approaches to dying and seen which of them work and which of them really, really don’t.

I’ve thought a lot about what decisions I’d make under a host of different circumstances…ceasing to eat at the last being a central possibility in terms of attempting to control the process from the outside.

But there’s another, even more important level of preparation to be made, and that has to do with developing my inner strength.  Gathering the ancient tools that have proved over time to be the most effective when dealing with dying.