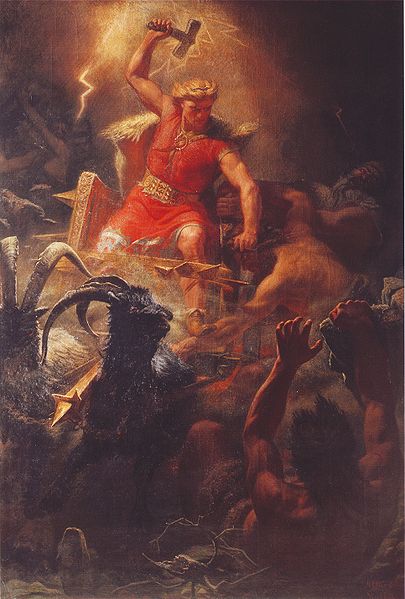 Thor’s battle against the Jotnar

It seems like most of the headlines I’ve seen on Google’s news feed over the last…well, almost a year now…about the sexual predation Sandusky pursued at his college and charity broke down into three basic subjects:

So very few have been about child sexual abuse and its survivors in general, or the young men who, in this case specifically, survived and finally struck back.  I feel the vacuum keenly.

Granted, there was a flurry of headlines about the young men involved when a brave handful took the stand to publicly testify about what they’d endured, but even those were disheartening.  Their tone often struck me as patronizing or downright sordid like Witness Weeps As He Testifies To Abuse or, far worse, Accuser testifies that other than abuse, times with ex-coach were ‘nice’.

It seemed like the writers wanted to evoke pity or outrage or even contempt, rather than kindle our respect for the profound resolve and commitment to truth displayed by each and every one of the witnesses.

For those who don’t understand yet, the level of courage it took for those young men to take the stand in open court was equivalent to the kind practiced by heroes in war zones.  The only way to stop Sandusky was for them to expose themselves.  It was like standing up to draw fire in order to reveal the location of the enemy.  The risks were immeasurable.  These guys deserve medals.

I understand that there wasn’t a lot anybody could or should write about them personally because their privacy and identities had to be protected.  But still, there was so much else that could have been said about their strength, cunning, and stamina, about the unbelievably complex set of skills they had to develop in order to navigate, survive, and eventually expose that degree of secret, targeted harm and cover-up.

These young men were amazing.  What they’ve accomplished is staggering.  Both the ones who came forward and told somebody about it, and the ones who couldn’t but still managed to survive and eventually get away anyway.  I’m so glad and grateful that now none of them will have to live for the rest of their lives being afraid that if they tell someone, they won’t be believed.   Because as bad as the horror of the abuse itself was, living with the secrecy, denial, disbelief, or outright shaming that can go on after the fact is even worse.

I just really, really needed to say this to them:

Thank you, gentlemen, for everything you’ve done.  Thank you for enduring and surviving in the first place.  Thank you for finally getting away from him when you could.  And, if you did, thank you for telling someone what was going on.  These things ALL, cumulatively, contributed to eventual justice.

And for those of you who risked everything and actually took the stand to testify, thank you for doing what some of the most powerful, privileged, and influential men in the educational world…what one of the most powerful athletic institutions in the nation as well as the vast cultural and financial empire that supported it…were too little to do.

You stopped Jerry Sandusky from ever hurting another child.  You struck the righteous, thunderbolt blow.  Kudos, gentlemen.  With all my heart I wish you the healing, dignity, and wholeness in your lives that you so richly, richly deserve.