Did I mention we’ve taken up kayaking? 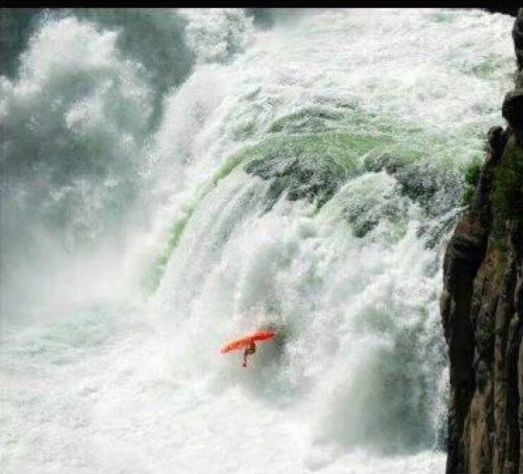 It began as a New Years thing (as in I’m really going to do it this time…) and, as hobbies go, is pretty easy to pick up around here since lake and river-rich Idaho is a major hub for paddling sports of all kinds.  (Except sea kayaking.  Obviously.)

We started by renting a couple of twelve foot yaks to paddle around a pond next to the river (from Idaho River Sports for anyone local and interested.  GREAT store.  GREAT people who work there.  Friendly and laid back.  They all LOVE paddling and LOVE sharing their love of paddling.  All you have to do is walk in the door and you’re their friend.)  We figured we’d rent for the summer, try out a few different kinds of kayaks, raise some money, raise some more money, then raise a wee bit more, until maybe we’d have enough to buy our own boats later in the fall or next spring.

But then we got a call.  They said that a couple of used ones had come up for sale (cheap!!…CHEAP!!) and the next thing you know, we were pulling back into the driveway with a couple of kayaks on the car.

(BTW, that’s not the hubster standing there with my arm around him.  He’s standing behind the cell phone camera.  That’s actually B. Daughter who had just dropped by to say hi.)

And then, abandoning all of our careful plans for gradual safety equipment accumulation (actually that should read “my” plans…the hubster, being a strong advocate for spontaneity and adventure, doesn’t have much use for safety planning,) we grabbed the wetsuits and life vests we’d (I’d) obtained so far and bolted up to Arrowrock reservoir on Sunday for a trial run.

Clearly, we survived, as you must have guessed by now since your’re reading this.  And even though we paddled across a fairly large body of very cold water twice, neither the rising afternoon winds nor the wakes from various power boats overturned us after all, thereafter requiring a long, weakening, futile swim into hypothermia, eventual unconsciousness, and drowning before we could ever reach shore again.  (Again, this type of mental scenario is strictly my territory.  I was made for disaster planning.  The hubster’s mind runs along far more optimistic lines and, indeed, is my saving grace.  Without it, by the time I got through envisioning all the bleak possible futures out there, I’d never leave the fricking house.)

But the indomitable hubster still managed to find an adventure for himself, in spite of all my best efforts to avoid one.  We had just pulled the car down next to the water in order to load the kayaks for departure, when a camping fisherman from the next site over wandered by with his dogs for a chat.  But barely had he arrived when he glanced out across the water to discover his power boat…which he realized with some chagrin he hadn’t moored securely enough…had come loose and was floating away down the lake.  It’s canopy was catching the afternoon wind, moving it along at a fair clip.

Then, to my horror, the fisherman casually mentioned that it looked like he was going for a swim.  A swim?  My disaster radar started beeping.  He was going to swim after his boat??

“You can’t!” I blurted out in alarm.  “You can’t swim that far in water this cold!  You’d never make it.  Hypothermia would set in before you could get there.”

At which point the hubster stepped bravely forward, ripped back his wetsuit revealing the large letter H on his chest, and said in a deep, booming voice, “I can get it for you.”

Well, needless to say the fisherman wasn’t turning down an offer like that.  The hubster quickly zipped up his life vest, grabbed his paddle, and launched his kayak again in the direction of the boat.  At first I thought (in resignation) that I’d just wait at the car since my arms had already fallen halfway off my shoulders from the earlier four hours of paddling.  But it didn’t take long (seconds!) for my mind to generate a surprising variety of different capsizing possibilities so the next thing I knew, I, too, was back in the water, paddling furiously after the love of my life, determined to save him from himself if necessary, or at least drown beside him in the ultimate worst case scenario.

In the end, neither were necessary.  Super H reached the boat, tied the dangling mooring line around his waist, and commenced paddling into the wind to try and cover the approximately quarter mile of water that now lay between the boat and the beach.  The fisherman’s girlfriend, sensing the uniqueness of the moment, wisely grabbed her boyfriend’s cell phone and started taking pictures.  This is what it looked like: 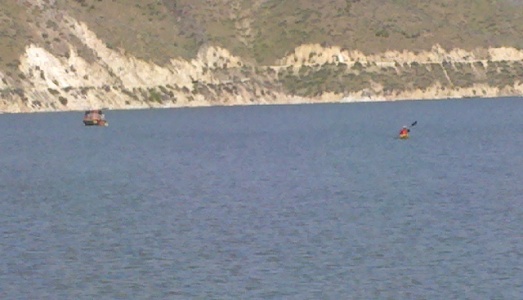 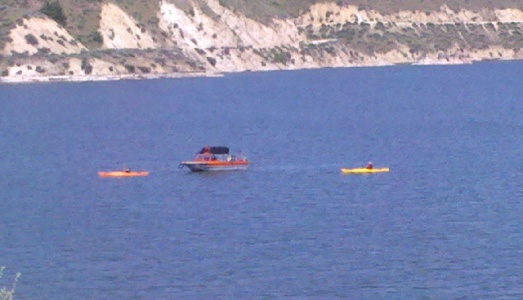 The wind eventually proved too strong for the hubster to return it to the beach.  He had to take it into a less convenient part of the shoreline but, all in all (since neither of us died and the fisherman was grateful to land it anywhere) it was tremendous fun.  A great maiden voyage for our new-used, spunky, little kayaks.  We were wondering what we should name them at the start of the day but the fisherman graciously took care of at least one of them for us.  As a parting gift he christened the hubster’s kayak Tug Boat.  In the future we’ll be calling it Tug for short.

SOBERING UPDATE:  My sister-in-law in Spokane read this post and then forwarded me a link to an article in the Spokesman Review concerning a novice kayaker who died of hypothermia in early April after his boat capsized in wind-driven waves out on a lake up there.  They were exactly the kind of conditions I worried about for us.  I’ll definitely be picking up a couple of tow ropes and a pump before we go out again.  And I’ll have the hubster watch this excellent video on the effects of cold water immersion, too, just so we’re on the same page.