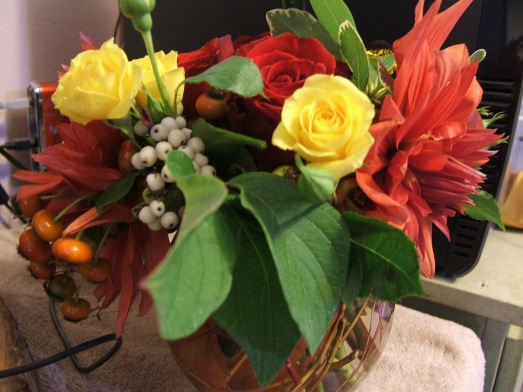 October is a big month for me.  It includes my mother’s birthday, my daughter’s birthday, my patron saint’s day, the anniversary of the day I was initiated into Eastern meditation (I used to convert a lot,) the anniversaries for my mother’s wedding, my brother’s wedding, and my own, a dentist appointment, a trip back east for the hubster, and what is arguably my favorite holiday of all time, Halloween.

So guess which one the flowers are for?

(If you guessed the dentist, you’re wrong.  Everything went okay this time.)

No, these are an anniversary surprise from the hubster, something he arranged to have delivered while he was far, far away in New Jersey on our special day.  The card is actually signed in his handwriting so I know they aren’t just an FTD.com cover-up.  He really pre-remembered and went to all the trouble of setting things up, which makes me feel warm and fuzzy and loved, but then totally awful, too, because I pre-forgot and didn’t arrange anything.  (Which is why I’m now writing this blog post.)

Unlike me, who can’t keep a secret long enough to surprise our dog, the hubster is a master of diversion of surprise.  Yesterday morning at the crack of dawn, just as he sat down on the edge of our bed to wake me up to take him to the airport, I surged up from a dead sleep in a panic because I just remembered that I forgot.

Oh no! I wailed.  I forgot our anniversary!  I didn’t do anything for you!

Then, crafty devil that he is, he assumed a look of chagrin to match my own, hung his head a little, and echoed, Oh no…I didn’t do anything for you either.

And because not only am I incapable of keeping a secret to save my life, I’m as gullible as the day is long, I believed him.  I was wildly relieved and made him promise not to do anything to try and make it up, and then I promised him I wouldn’t either.  We agreed to do something when he got back after which I thought I was home safe and guilt-free.

Happy Anniversary, sweetheart.  And thank you, too, for marrying me on that breathtaking, autumn day back in Jefferson County Park all those years ago.  Thank you for chasing me when I took off running during the ceremony, for catching me before I got to the trees, for carrying me back to the preacher in your arms, and for understanding why, after my first marriage, that I just really, really needed to make sure.

I sure do love you.